What is that all about?

I had the pleasure of answering questions about this street ministry at the Vandelia Church recently, and it makes sense that I write more about us.  This will make a great way to introduce us and open the doors for Jesus.  It aids by answering who we are and how to join us.

Agent X began a career in ministry to addicts at the One-Eighty House in Abilene, TX back in 1999 and a career in prison ministry back in 2000.  In 2002, I moved to Lubbock, TX and joined The Shepherd’s Servants, a prison after-care ministry.  In 2004, I moved out to the streets reaching out to addicts, pushers and prostitutes with a party.  This party changed everything.  The ministry began taking on prophetic dimensions.  And it was about this time that I read a book by Tony Campolo called The Kingdom of God is a Party.

We stopped a murder with that party one night.  (More on that another time, but) I suddenly found myself more open to the idea of prophetic ministry when that happened.  It seemed that the chaos of the streets responded to a humble worship party in profound ways my partners and I could not ignore.

In 2008, Agent X joined an all night prayer vigil with the homeless of Lubbock.  I will not lie,  I got cold that night and went home at about 3 in the morning.  But when I crawled into that bed and warmed up, I think I took the homeless with me in my heart.  I became deeply saddened by the situation I had just left and angry that this “Christian” town does so little to address it.

Agent X moved to tent city (as a weekend warrior of sorts) in the spring of 2011.  But after a year of prayer and relationship building there, I came to realize that tent city only served a fraction of the homeless of Lubbock.  I became more intimately aware of so many logistical concerns involved in outreach in general, but also more intensively aware of how little worship is considered as central to that outreach. 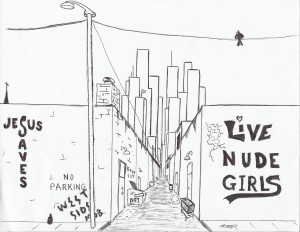 I began hitting the streets in a self-styled urban plunge.  In time I found myself attending the Premier Homeless Church (not its real name).  I became a volunteer there.  That bunch (nameless in this post) was known for opening up their worship facility to host all-night prayer services which subsequently allowed the homeless to take nightly shelter from the cold in previous years.  I admired that.  It seemed subversive and prophetic to me.  I wanted to join.

The first year Agent X was attending at the Premier Homeless Church, I volunteered to chaperone groups of people in the facility on cold winter nights.  But the second year there, I was informed by leadership that we would not open the doors to the poor and homeless on various winter nights.  I protested this decision.  Reasons given for the decision were lame.  I was told we did not have volunteers.  But that was not true.  I was told that such help was “enabling” of the poor.  I quoted Jesus from Matthew 25:40 and Revelation 3:20.  None of the arguing opened the door again.

Meanwhile, in April 2013, Agent X hosted a worship feast at his home with his family and with 4 men drawn by God to come eat, pray, sing, and ponder God’s Word.  In attendance that day were Agent T, Agent J, Agent M, and Other Agent J.  (We take these pseudonyms from Agent B and his old retired blog called The Agent B Files.  Please check it out.)

Our little group of homeless men and Agent X’s family chose to look into an obscure little passage of the Bible that day from II Kings 6:24 – 7:20.  We saw how that in Samaria, the people of God were under siege, starving, and helpless.  The economy had tanked, and everyone was looking out for their own interests at the expense of others.  And in the midst of all this, God used a handful of humble beggars to send his Gospel Message to the king and the nobles.

But not before feeding them from his table.

That day the Fat Beggars School of Prophets was born.  We embraced a call to a life of prophetic ministry where we would take our Jesus meal – communion – to the streets and share it with other homeless men and women.  Actually, we invite all of Lubbock to join us.  But even if Lubbock does not join, we will bear the image of God in the breaking of bread (Luke 24:30-31) as we commune on the stage of street corners, back alleys, empty lots, and in front of locked up church house doors.

Shortly after that day, we began taking communion to the streets and finding homeless people joining us in worship.  Agent X would often camp out with congregants, pray with them, sing with them, listen to them, and share the meal with them.  Most of this was inspired by the work of Shane Claiborne, a student of Tony Campolo.

But let us not forget that during this time, Agent X was haggling with the leadership at the Premier Homeless Church trying to negotiate a reinstatement of the long-standing practice of opening the church house doors for the homeless on cold nights.  I attended meetings called by leadership on numerous occasions and traded scores of text messages and emails regarding the issue.  Resolution was not reached.  Leadership became entrenched in the new position.  I became entrenched in the old.

Agent X then led a communion service at the locked door of the premier homeless church under the watchful eye of the security camera.  Several other homeless people attended that prayer service and took communion as we knocked on the locked door quoting Revelation 3:20.  Shortly after that, I was kicked out of that church.

Agent X also began publishing pamphlets called The Fat Beggars’ Spot – a Revolutionary Rag.  This pamphlet also is subversive and does not apologize when it confronts the position of the larger church culture and puts them on notice with God’s word in front of the homeless population as witnesses.  Thus the prophetic edge is sharp and it cuts.

Here at Fat Beggars, we think he confronts the powers that be and tells them that Jesus is Lord and King of Israel.  This Lord and King is also a Shepherd of the Sheep.  He is knocking at your door.  If you open up, he will come in and eat with you!  The Fat Beggars are getting fat on the meal Jesus gave us while the church is starving inside the city.  But if you open up to us, we will destroy your current world order as WE ALL LEARN TOGETHER WHAT IT IS TO EXPERIENCE GOD’S KINGDOM RULE AND WILL BE DONE ON EARTH LIKE IT IS IN HEAVEN!

This is just a nutshell view of Fat Beggars School of Prophets, but it is the lens we hope you will appreciate.  We don’t really need to raise a whole lot of money.  We don’t have to deal with logistics.  We just ask the church to be the Body of Christ and do what he does as he walks those dusty Galilean streets and trails.  Then we will all be children of God.

Humility is the Ticket to Ride

You can join us very easily.  When you see a group of homeless people knelt on a street corner or in a city park sharing prayer, just get out of your car and your comfort zone, walk over to us, and kneel before the Lord in prayer.  If we knock on your door, open up.  It is Jesus you are inviting in with you (Rev. 3:20/Matt. 25:40).

Believe me.  This changes EVERYTHING!