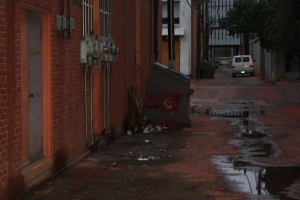 I need to be clear with my readers on this point:  I am a weekend warrior of sorts.  I do not sleep night after night on the streets.  I once spent three nights in a row without a shower on the streets, but mostly I go out when my work and family schedule allows it.  Also, I go out numerous times that I don’t stay the night.

I have offered tidbits of my experiences throughout this blog, but it seems that a blog like this should give a gritty account of what it is like out there.  Mostly I describe suffering, but sometimes I am richly surprised  by joy.  I would like to offer just a few slices from the experience pie.  Without telling whole stories, background, and context, I just want to take you there with me to the raw, cold reality.  To help you walk a block in the shoes of the homeless by relating a handful of my own experiences.

The cold of winter.

By far the hardest part of sleeping on the streets for me personally is the cold.  I fall apart in the cold.  Just can’t take it well.  My experience with the cold is not representative of all homeless people, for I have seen men collect snow in their beards and yet not complain.  But I always go prepared.

My preparation involves layers of clothing and usually some sort of mat or pad.  A few years ago I purchased insulated coveralls to wear in the cool months as I minister on the streets.  I keep them in good shape, and so I am often the envy of many a homeless man, and yet still I shiver in them.

I recall a night early in my urban plunge career when the temperature went down to 37 degrees (the coldest I ever lasted the night in) and I wore the coveralls, 3 shirts, an over coat, and rolled up in a tarp.  The wind whipped madly all night.  I hunkered down the best I could and shivered.  The pavement was hard as rock and cold.  I got about as settled as I could get.  Almost drifted into blessed sleep a time or two.  But then I got a faint itch in the small of my back between the shoulder blades.

Think about that.  I had 5 layers of clothing constricting my arm movements.  I literally could not reach the spot with my hand (which was buried in a heavy insulated glove, btw).  I tried to forget it.  But the faint itch grew more intense, like the devil hounding my soul.

I was faced with the question: Do I roll out of the tarp, which the wind is trying to whip off of me anyway, peel off 2 or 3 layers in hopes that then I could reach the itchy spot?  Or do I stubbornly bear it and hope it goes away?

I spent a good 15 minutes trying to ignore it.  Then I peeled and scratched.  I fought the wind, the tarp, the cold, my loose layers, and the relief was hardly worth it.  Then I fought to get it all back on, tucked in, and settled down again, but now I was shivering up a storm.

And then it hit me: If I was home in bed and had a faint itch in my back, I would scratch it with hardly a care.  I would not remember it 2 minutes later.  But the suffering of that itch on the street turned into a 20-minute ordeal of the first order.  And I thought that if that were my nightly struggle, I would be one mean dude most mornings – cantankerous and ugly to anyone who greeted me.  Probably wouldn’t be worth the job interview I didn’t bathe for! 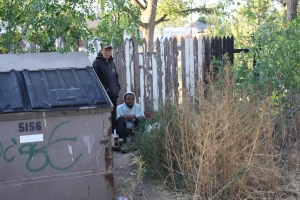 Then there are the neighbors.  You gotta be careful where you sleep, who you sleep among, and especially who sees you there.  Neighbors, both homeless and housed, are at least as much a hazard as asset.  The homeless will make noise and leave a mess; the housed will think you are taking over their neighborhood and call the cops.

Yeah, I camped with drunks.  The peaceful kind are not a problem – well unless the mess they make is in a nice area.  The addicts and hell-raisers, though, will get into a fight or make a lot of noise and give away your location to the authorities.  And there is no reasoning with them.  (I remember one time when one dude smacked another dude on the head with a brick!  It could have killed him.)  But then, when you find a REALLY good secluded place, like behind the hedges under a portico at a church (right below the no trespassing/no loitering sign(s)), you really don’t want to make a scene, but you can’t convince a rabble rouser of that to save your life!

I woke up on several different occasions to see some mysterious dark figure rummaging through our camp.  That is scary.  No introductions.  You were just sleeping there completely vulnerable to the wide world of wonders one minute and then as your eye pops open and rolls around, you see someone you don’t know hunched over your stuff, or maybe your partner’s stuff – or maybe your partner!  The dark figure picks through the belongings and then quietly moves along and disappears into the shadows.  How do you go back to sleep after that?

One time I awoke in an alley between two dumpsters next two a couple of my friends.  I saw a dark figure with a cane hobble up to our spot and stop.  I lay there watching quietly.  The figure did not know I was awake.  The figure poked at a pile of blankets next to my friends.  So I spoke up, “Do you need a place to sleep?”

The stranger said, “Do you have any blankets there to spare?”

It so happened that the blankets my friends had were soaked from a rainstorm earlier that day.  I had a dry sleeping bag underneath me and another one over me.  I said, “Those blankets are all wet from the rain.”

The stranger said, “Oh…” and started to move away.

The dark one just waved as he hobbled away on the cane.

Suddenly I thought better of my exchange and shouted after him, “It’s a gift from Jesus.”  And just then I realized it was a gift to Jesus.

One time I was sleeping in “monument park” (not its real name, but that’s what we rough sleepers call it because of the tornado monument there) and a guy came wondering up in the dark and stretched out on the park bench nearby.  I noticed he had no blanket or coat.  It was like 2:30 in the morning and my partners were all sawing logs.  I thought, I can give him my coat, but then I will be cold.  Then I realized that I could give him my coat and just pack it in and go home for the night.

That decision improved both our lots in life – at least for a night.

Then there is the smell.

I got with a group one time taking shelter at a church in a limited space.  One cat was deeply schizophrenic and unsocial.  He did not talk much, nor did he shower/bathe.  We all got as far from him as we could, but still made him welcome.  But the cat just lay there half the night making soft grunts followed by ghastly faint farts that measured 11 on a 10-scale for paint-peeling.

A follow up note on that guy:  I went to Broadway Church of Christ one Sunday morning a couple of years ago so that I could worship with that church and write a prayer request for the homeless that sleep around that building on the visitor card.  I did not know a soul in that church when I walked in to the high, vaulted-ceiling sanctuary and took a seat waaaaaaaay down at the front.  But the schizophrenic farter was there on the second row from the front, and I was never so happy to see someone I knew as that moment.  I did not care how bad he smelled, just then.  In fact, I kinda liked that he was representin’ so well!

“Please don’t throw your cigarette butt in the urinal.  It makes it soggy and hard to re-light!”

Most of my street friends are not bashful about using the bathroom next to a dumpster or a bush or a parked car.  I have seen them do it in broad daylight.  It is a sad sight.

And I have taken a whizzz in the bushes a few times myself, but I am extremely conscious of proper facilities if I can have reasonable access.  I have been known to walk 8 blocks one-way to the all-night Wal-Mart just to use their men’s room.  I have on some occasions loaded up in my car as many as 4 times in one night to drive up there just to pee.  Contrast that to my home where I have a bathroom door just 5 feet away from my bed!

Of course, when I go out, I am extremely conscious of my food and fluid intake for those very reasons.  And yet who can pass up The Lord’s Supper with a camp of homeless men when they eagerly welcome you to stay, pray, talk about Jesus deep into the night?  We sing songs of praise and worship.  We give testimonies and preach to each other.  And my personal shtick is to bring out the sacraments along with a Little Caesar’s Hot-n-Ready!

I like to offer everyone their own bottle of grape juice.  Some folks are just too questionable to share a bottle with.  But I can supply 6 bottles and some bread for under $5.  The thing is… when 3 or 4 or more drifters join us late in the ceremony, we crack out more juice and take another round at it.  After 2 or 3 bottles of grape juice, I am going to be needing a bathroom before dawn!  I hate to put those ideas together so closely, but when you do street ministry like this, you can’t help but wise up to these facts of life!

And this is the surprise of joy I alluded to before.  Can you imagine finding Jesus in “the least of these brothers (and sisters) (Matt. 25:35) and not communing with him?

But I must say that your conventional “Christianity” can’t even imagine it.  Your faith is too small!  I recall one night sharing The Lord’s Supper with a group from the “church” outside on the “church” steps when the pastor emerged from his study.  We invited him to join us, but with a wave of his hand, he dismissed us and excused himself saying, “No thanks.  I already ate a big meal.”

If your contempt is that bad, you aren’t going to find Jesus in the streets.  But then you wouldn’t likely read this blog either.  But for those of you who do read here from time to time, I invite you to expand and EXPAND and EXPAND your imagination to a size that maybe, just maybe, God could fit into it.