It’s not an exact anniversary, but it’s close enough.  I will claim it.  And I have become more than an April Fool for God.

We formed the Fat Beggars School of Prophets around my family’s kitchen table following Sunday worship at Carpenter’s Church three years ago this week.    In addition to my wife and kids, four street-homeless men joined this foundational worship service.  In attendance were Agent T, Agent M, Agent J and the other Agent J.  These men answered a call from God to come to my house after church, grill steaks, sing songs, pray, and examine the text of II Kings 6 & 7.  In fact, one of the leadership members at Carpenter’s inadvertently directed one of the four men to join us that day.  (He still has no idea what role he played in placing God’s call on that man’s life!)  Therein God inaugurated the Fat Beggars School of Prophets.

We adopted the mission statement: We go to the place of shame, pain, and despair in our community and bear the image of God there.  We considered several ways we might go about it, but most pointedly we considered the beggars in that text inviting the city of Samaria to come eat the meal God had prepared for them.  Thus we decided that homeless people could invite Lubbock out to lunch at the Lord’s Table.

Sadly, inside of a year, Carpenter’s Church tried to disband us and officially kicked me out of the church.  But not before they closed the doors on their own members on numerous cold, winter nights when I (and others) had volunteered to chaperone the homeless guests – a practice we had all done many times before.  But, true to prophetic form, we found that a prophet is not without honor except in his own house amid his own people!  Our crime?  Worship.  We dared to take our communion to that locked up church house door and break the bread under the watchful eye of the security camera.  I guess God really challenged their authority and chapped their hides.  The shepherds had no choice then but to either open the door and honor God or kick his prophets out to the curb. 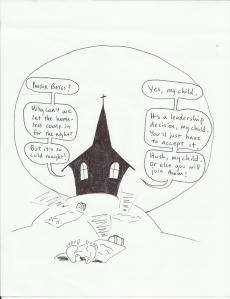 We have tried to learn to count that as a joy and to consider ourselves worthy to suffer for the name.  It’s not all bad.  But we note that Carpenters is not the only church in town to shun the homeless; it’s pretty much universal in this “Christian” town.  Thus, our work is cut out for us!

We have hosted dozens upon dozens of communion services in parks, empty lots, behind liquor stores, in front of locked up church house doors, at Tent City, in alleys, on street corners and at libraries.  Each time we invite Lubbock to join.  And many times Lubbock has joined.  I recall one day when we were in the park on Ave Q and a car screeched, made a dangerous U-turn, and came back to the park.  Two women got out and joined us because they said they could see that something important was happening!  We held a parade of homeless and celebrated Jesus in communion on a street corner and the Aldersgate United Methodist outreach ministers found and joined us!  One time a passing pastor blessed us and said, “Sometimes you gotta take it to the streets!”  And I have personally witnessed beggars and bums transform into worshiping pilgrims, preachers, and prophets at the Lord’s Table countless times. 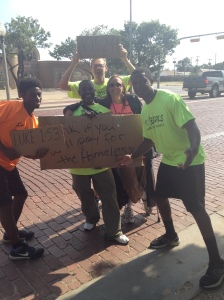 The FBSOP is not the only milestone I should mention on April Fool’s Day.  It was the First of April when I first joined Tent City back in 2011 – two years before the prophets.  I began going out to spend my weekends there in my own tent just a couple of months after it opened.  I filmed the founding of that community with my hand held camera over the course of six months.  I shot hundreds of hours of raw footage that (if I knew someone skilled and willing) could be made into a feature length documentary!  And that experience was actually the moment my homeless ministry kicked into high gear. 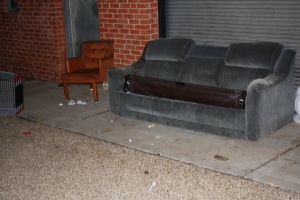 I began to feel comfortable, we might say, among the homeless during that year.  I made a huge transition from feeling afraid and contemptuous to sensing I was part of the community as I crossed into that world at the gate with the “Enter At Your Own Risk” sign.  And I have never looked back.

In time I began to realize that Tent City is actually a gated community with standards (rightfully enough so) which excluded many people to the streets.  Somewhere along the way, I decided I needed to venture out beyond the confines of that fence and try sleeping in an alley.  (Isn’t that what shepherds do???  Search for lost sheep???)  That was another level for me.  Another threshold.  I slept under No Trespassing signs and in parking lots where I could have been run over if a driver had come along and not seen me… but I wanted to walk a block in their shoes… So I did.  And then we communed with Jesus.

So… April Fool’s Day marks two milestones for me, both related to homeless ministry.  And blogging on them dictates I should make note of them.

Let me take this opportunity to ask you to pray for Carpenter’s Church.  Of course I pray for repentance.  But despite my quibbles and the shameful way both this ministry and I have been treated there, that church is still on the front line doing what most won’t even dare.  Not everything they do, say, or believe is all bad – some of it is actually pretty good.  And so I ask you to join me in thanking God for them and asking God’s blessing on them as well as challenging them to step up in faith and honor God’s will and his prophets.

And really, I ask you to join me in that prayer for all the church of Lubbock.  We prophets of homelessness are at a milestone.  We have come a long way, which is great, but really we want to get back HOME.