I feel sorry for the weatherman.  Not too much, but some.  (You might prefer I say “weather forecaster” to avoid sexist language, but wait until I am done.  You might be glad I use the male terminology.)  I think there is a level of second-guessing that goes against nearly all professions.  If your doctor says, “cancer,” you BOTH go into denial AND get a second opinion.  Politicians are constantly getting harangued by the comedians and pundits and analyzers.  But preachers and weathermen are the really easy marks.  Preachers because in the final analysis, no one in the empire really wants to know the truth, and weathermen because their chance to “get it wrong”  goes pretty much minute by minute everyday and frequently has drastic consequences.

I bet it stinx every time he visits his favorite café and everyone in the joint knows his name, his face, and how wrong he is.  I bet he hears about it all the time.

But there is one thing he never seems to get criticized for that probably is more important than getting the correct wind speed, temperature, or cloud cover predicted.  What could that be?

Well, as Fall Season sets in, we begin to have cold fronts and cold snaps.  The temperature and moisture at night time become deadly to anyone stuck out in it.  The weatherman suddenly adds a little quip to his forecast, a reminder to “bring in your pets and potted plants.”  That part is good, of course, but it is the part he leaves out that concerns me most.  He didn’t say anything about the people left out there.

Bring in your potted plants and your pets, y’all, cuz tonight it’s gonna freeze.  You don’t want your plants and pets to suffer.  Right?  Right.

Just a friendly reminder.  Might make the difference between life or death or fifty dollars of unexpected expense.

But it neatly ignores the image of God in “the least of these, my brothers” who will tough it out, possibly getting harassed by law enforcement for taking cover in a “no trespassing” or “no loitering” area.

I don’t mean to devalue the plants or pets one bit by pointing this out.  On the contrary, I mean to tell the weatherman to stop devaluing God by ignoring him so casually.  Lubbock, Texas is a “Christian” community – historically.  At least that is how we have viewed ourselves over time.  Just drive through this town and see all the huge, monolithic church buildings on street corner after street corner.

But then look close at the small signs posted in the covered areas around those properties and see how much those “churches” care about “the least of these” who might be taking shelter from the cold there. 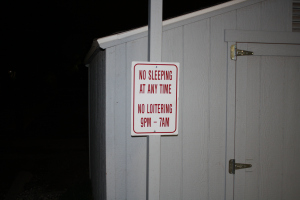 Perhaps there is something wrong with this self perception.

But the weatherman is in a position to very easily call all of that to account by adding the simple words “and the homeless” to his list.  Be sure to bring in your potted plants, your pets, and your homeless tonight.  It’s going to freeze.  I, personally, think of this missing bit every time I hear this message.

Even if he is wrong about the freeze, even if it only gets down to 33 degrees, he will still be right to say it.